Cancer cell migration is an important biological concept that contributes to angiogenesis, metastasis, and other oncological processes in the vasculature. Chemical messengers are integral to most cancer cell migration events and serve to direct cancer cells to tissues or the vasculature via chemotaxis. Chemotaxis is a dynamic event with numerous steps of cell communication and response. In order to examine these processes in detail over time, it is necessary to observe cells in situ.

The BioFlux system can be used for screening different types of tumor cells for invasive phenotypes, screening compounds to inhibit or otherwise affect invasion and or angiogenesis, or to study chemotaxis of circulating cells in response to stimuli or inhibition. 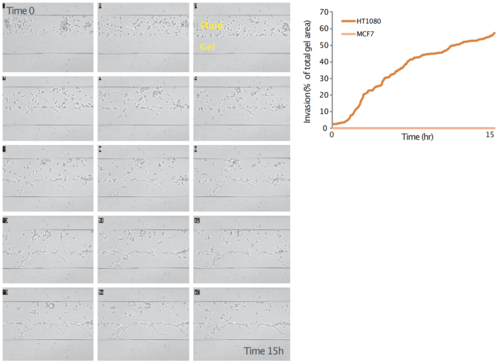 Invasive HT1080 cells began to migrate after 4 hours of perfusion into the matrix and continued invasion throughout the entire experiment. In contrast the MCF7 cells, were as expected completely non-invasive (not shown). Timelapse over 15 hours of either invasive (HT1080) or non-invasive cancer cells (MCF7) into Matrigel. Cell invasiveness expressed as pixel intensity over total gelled area of the channel as a function of time. Heterogeneity in Circulating Tumor Cells: The Relevance of the Stem-Cell Subset

Applications and Opportunities for Using the 24-Well Dual Flow Plates

Enhance your cancer assays with flow using the BioFlux System

See What You’ve Been Missing in Your Cell Based Assays